Our trip to Israel - Part 6

As the rockets rain onto Israel from Gaza again today (more than 75 in the last 3 days) I'd like to share with you my trip to Sderot.  My Missus stayed in Tel Aviv that day, shopping and touring with Toby.  I rented a Nissan Juke (hilarious if you speak Hebrew, Juke means 'cockroach') and drove first to the not yet completed Women of Valor Center in Nitzanim. 10 heroic women, including Mira Ben-Ari stayed behind to fight the Egyptian invaders on Jun3 7, 1948. 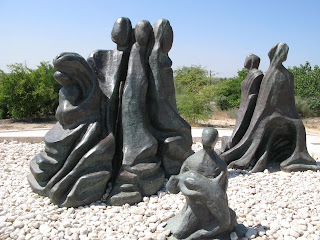 After a chat with the new curator about opening dates, fundraising and the work left to be accomplished, I'm 'riding da Juke' south to Sderot.  Thomas is waiting at the Sderot Media Centre for my noon arrival.  After introductions my journalist's tour begins at the Police Compound, where we're examining casings from rockets which were recently fired into Israel from Gaza. Sderot is the town with the most bomb shelters per capita . ... in the world.  Every home has one, every bus shelter IS ONE. The children's school has a bomb shelter built over it, every business and public building has one.  Some of the best new music to come out of Israel originates in Sderot, bands use the bigger shelters as practice spaces during the attacks. 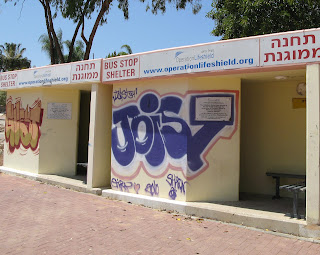 We took a trip to 'Journalist's Point', where you can see into Gaza. Imagine, living next to a group of people who fire rockets into your neighborhood from this far away EVERY DAY AND NIGHT.  It's law that you mustn't wear your seatbelt and you have to keep your car window open so you are able to stop your vehicle, get out quickly and lay on the ground when you hear the 'Code Red' siren. 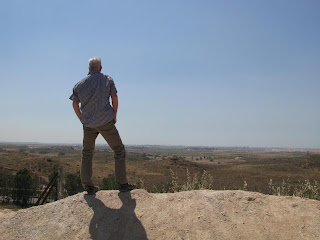 Stopping into the Sderot Magen David (EMS) stn we took a tour of the first rate ambulance service that cares for Israelis in the area.  What a terrific, friendly & brave bunch these Pararamedics are - this was the first EMS station I'd ever seen that had a bomb shelter in it. 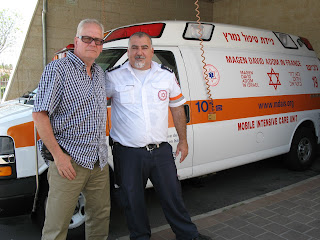 So after a drive to the Gaza Checkpoint (no pictures allowed for good reason) we tripped back to Sderot and had a late meal of pita w/ 3 kinds of hummus - Delicious! This 'working man's cafe' was a perfect place to relax and talk with the locals after this tour. "Why do you stay here if it's so dangerous?", I asked one couple. "Because this is our home, we will never leave.", she said. 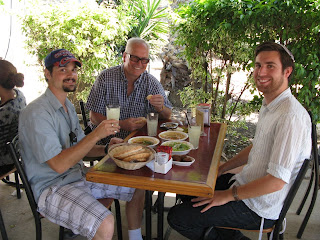