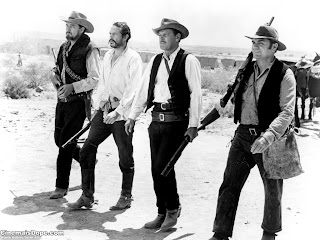 We knew this attack was coming, and thank goodness
- this time we're prepared.
This is like every western & war movie standoff ever made, with the good guys knowing what was about to happen - loading their guns while getting food and more ammunition ready.

"Canadian Muslim group urges vigilance in wake of Norwegian massacre"
After 16,000 islamic terror attacks in the last 10 years, with daily beheadings, bombings, honor killings and foiled jihadi plots, in Canada and the U.S. (like the one yesterday in Fort Hood) these muslim clowns have the absolute unmitigated gall to 'say they feel like they're constantly in danger'.  As FFOF puts it, the only thing they're in danger of is somebody finally getting sick of their bullshit.

Mark Steyn's article 'The Left's strange hostility to Hirsi Ali' in Maclean's magazine echoed the same sentiment.   "In the Muslim world, Christians and Jews have been on the receiving end of a remorseless ethno-religious cleansing for decades. Christian churches get burned, along with their congregations, from Nigeria to Pakistan. Egypt is considering stripping men who marry Jewesses of their citizenship. Saudi Arabia won’t let ’em in the country. In the 1920s, Baghdad was 40 per cent Jewish. Gee, I wonder where they all went."

Where they all went was where all freedom loving people went for the last hundred years . ... WEST.  Now, in spite of the billions and billions of arab petro-dollars mulsims are fleeing the shitholes of the middle east - to go where?   WEST - but this time they're not interested in freedom, or starting their own businesses, or making a better life for their children.  They're hell bent on domination and destruction of Western Culture.

Tell me, just who in their right mind, muslim or not, would look on the mountains of evidence and decide that fascist islamic ideology hasn't been responsible for more pain, suffering and death over the past century than any other war or conflagration?  (I won't denigrate religions like Christianity or Buddhism by saying islam is a religion, it isn't - islam has more in common with communism and fascism than it has with any combination of religions).

It's like the slavery argument - there are those I've heard call slavery 'America's shame' - putting forth that the United States started a slavery trade that has lasted into the 21st century.  Again, what bullshit!  Slavery started long before Western Culture was ever conceived, in muslim countries - where it still exists today.

So don't tell me this 'Christian fanatic in Norway' was Christian, because he wasn't.  It's like comparing the pilot of an airplane with a terrorist on an airplane.  Sure, they're both on an airplane, but that's where the similarity ends.  The Calgary Herald shows horrendous irresponsibility for printing unchallenged the claims of the Canadian arm of the Council of American-Islamic Relations, an unindicted co-conspirator in a major money laundering case in the U.S.

As Michael Coren said on his blog, "The media's screaming claim that the Norway mass murderer is a Christian Fundamentalist is one of the most dishonest, irresponsible and mean examples of gutter journalism" - Michael couldn't be more right. Well, this time many more westerners are loaded and ready for a standoff.  NO, not with police, or muslims, or democracy - but murdering maniacs like Anders Behring Breivik and CCAIR thugs like Ihsaan Gardee.  Those two have far more in common with each other than either could ever hope to have with real 'Christian fundamentalists' or other freedom loving people anywhere in the world.

Each time idiots like Gardee open their mouths, they fool fewer and fewer people.  It's another reason to believe in free speech, allowing this muslim shill to spout his rhetoric until everyone has heard it - and comes to the conclusion that they'll no longer be misled by this cancer on our Western Culture.
Posted by Don Sharpe at 9:53 AM No comments:

The 'Bill Ayers of Norway' 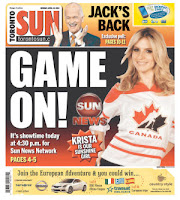 Celebrating the first 100 days of Sun News Network!
Credit due QMI / Sun News for finally providing an alternative to the 'lame stream' media.
Be watching the 1 hour special tonight at 7 pm ET - a look back at their success!
Posted by Don Sharpe at 7:42 AM No comments:

Twitter is great for collecting individuals or groups under one central premise.
CBC deserves a prominent spot under #noheavylifting for their failure to publicize the 30 War Criminals the Canadian Government is searching for.
Posted by Don Sharpe at 8:36 AM No comments:

When the so-called 'culture' you're dealing with is barbaric.
New Aussie rules require muslim women (& men) to lift veils when requested by police.
I'd ban them outright in all public spaces.
Belgium has a law in place that fines anyone wearing a veil in public, and includes a 7 day jail term for same.
Posted by Don Sharpe at 8:20 AM No comments:

For those fools "deluding themselves that making it easier for Hamas to get weapons to kill Jews with was the moral equivalent to marching with Martin Luther King Jr. (!?!). See Day 15 – ‘From Flotilla to Fauxtilla to Floptilla – all the while dishonouring Dr. King’s memory’" 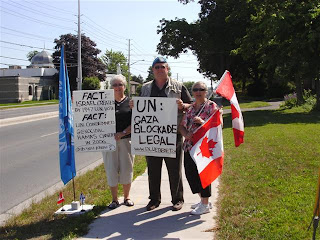 Happy 4th of July to our American friends.
Statue of Ronald Reagan unveiled today in London.
What makes America so great?

Posted by Don Sharpe at 6:31 AM No comments: