"We will not be moving it to a different facility, and we’re not bending to any pressure.” 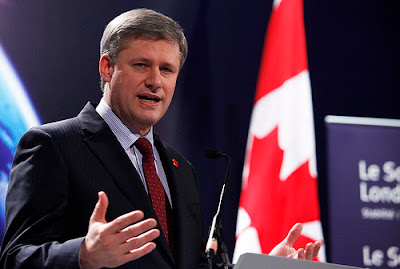 Now that's leadership from a Prime Minister.  Good on ya, Stephen!
Posted by Don Sharpe at 7:04 AM No comments:

The black flag of Jihad

If you see the 'Black Flag of Jihad' on your street, it's probably too late. 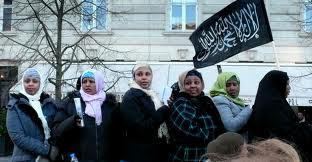 How long before you see the black flag in your home town?
Posted by Don Sharpe at 6:56 AM No comments:

Al Queda have their own magazine?
With slick production values, pictures and articles like 'Know Jihad is your Duty' and 'Q&A with the Sheik'. 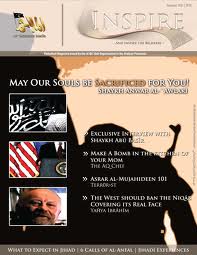 There's also a tributes to the martyrs, and advice like ". . . military activity against America and her allies now must lie within the framework of light guerilla warfare, civilian terror and secret methods."
Posted by Don Sharpe at 6:46 AM No comments:

RCMP apologize to Muslims for arresting terror suspects during Ramadan.  No word on whether Christians will receive apologies for arresting bad Catholics over Christmas.
This from Tarek Fatah, a most useful  . . ... ah, nevermind.  He's certainly not the worst of 'em.

I wonder if we could get Dennis Miller to work with the R.C.M.P. Islamic-Perversity Office, he's got a far better handle on the issue, and he's entertaining!
Posted by Don Sharpe at 8:28 AM No comments:

Update:  Some background here.
The message is, ‘Any attempt to mitigate or resist the most strict and illiberal interpretations of sharia law will result in your death and there is nothing you can do to stop it’.


The governor of Pakistan's Punjab province was assassinated by his own security guard Tuesday, because he spoke out against the country's controversial blasphemy law.

Clearly, we need to cut off all aid to Pakistan until they get the Koranimals under control.

Pakistan is on the front lines in the fight against islamic bullying and cruelty.  Nearly 1,000 people have been formally charged with blaspheming mohammed, conviction for which is punishable by death.  The government, which needs the hard-line islamists onside to stay in power, accepts that many will be convicted, but those convictions have always been overturned on appeal.  Not One Single Person has ever been executed for blasphemy:  but here's the kicker - over 30 people who have been aquitted or released on bail awaiting trial have been murdered by koranimals sic'd on them by their psycho imams.

This story is so horrific, so crazy, that even CNN is forced to report it accurately.  There's no 'spin' you can put on this that would make Pakistani islamist's behavior acceptable to anybody who is truly human.  Executing someone for speaking their mind, for drawing a cartoon?  These are 'values' incompatible with western values, and may it always remain that way.

"We Will Spread Blood Everywhere"

A University Education is Important

isn't it?
This young lady wants to become a diplomat at the U.N. - her ignorance makes her a perfect candidate.  Bat Ye’or asks, "Why are we even still part of the U.N.?"
h/t Sheikyermami
Posted by Don Sharpe at 7:07 AM 2 comments: