Our trip to Israel - Part 1

"We're going to Israel."
That statement elicits many responses.
If we're talking to our Jewish friends, it's, "Wow, that's Fantastic!' 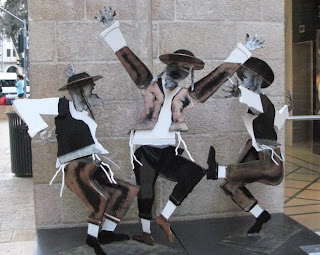 Our secular/Catholic friends,
"Uh, really? (pause) Why would you want to go to Israel?"
"Are you Jewish?  Aren't you afraid?  Is it safe?"
That's a huge difference in reaction to one simple sentence.

We chose late April for several reasons.
Holocaust Remembrance Day, Memorial Day and Israel Independence Day, they all happen within an 18 day period.  It's also Spring!  Israel is green, the weather is perfect, Passover is .... over, so it's not crowded.  Perfect!

We left on a Sunday, flew from YYC to London Heathrow. 10 hour layover. We were excited and had enough electronic entertainment devices to keep us occupied.  And we saw the Queen!  Well, a cardboard cutout of the Queen. We had coffee with her anyway. 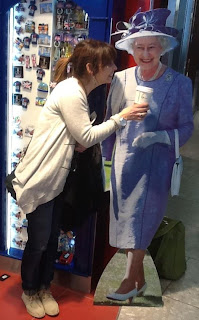 Then a 6 hour flight to Ben Gurion, arrived at 0600 on Tuesday. - Whew!  Off to our hotel in Jerusalem, traffic here is very different, our tour bus driver is reckless enough that I actually told him to slow down.

Prima Royale Hotel in Jerusalem, stayed there 4 nights, highly recommend it.  Fantastic staff, wonderful food, very clean and close to everything.  Do Not Stay at the Prima Kings Hotel 4 blocks north.  Everything we raved about at Prima Royale is just the opposite at Prima Kings.

After a nap, we're up and wandering Jerusalem. Ben Yehuda Street, cafes for delicious coffee and hummus, some light shopping and gawking - our tour starts tomorrow! 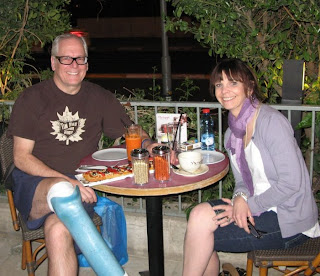