May 2 - marks the day when Allied troops liberated the first Nazi concentration camp at Buchenwald, Germany in 1945. The full name of the day is Yom Hashoah Ve-Hagevurah, which means the “Day of (remembrance of) the Holocaust and the Heroism”

"General Eisenhower ordered every American soldier in the area who was not on the front lines to visit Buchenwald. He wanted them to see for themselves what they were fighting against." 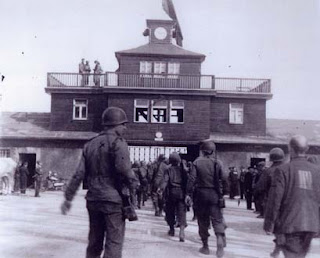 Ike understood that any human deeds that were so utterly evil might eventually be challenged or even denied as being literally unbelievable.
For these reasons he ordered that all the civilian news media and military combat camera units be required to visit the camps and record their observations in print, pictures and film.
Doubletapper has terrific video footage of the 2 minutes of standstill in Israel at the sound of the siren today at 10 a.m.
Posted by Don Sharpe at 8:14 AM