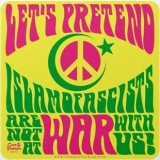 There are far more reasons not to host Arabic language and culture programming in Calgary Public Schools than there are for it’s inclusion.
First and most compelling are the ties that instruction in Arabic would have to Islamic ideology. There is no reason for us to risk supporting islamic views in our public school system, views that run completely counter to our western culture and traditions. I realize that with the above statement, many will accuse me of racism – however nothing could be further from the truth. While Arabic is a race, islam is most certainly not, and while the distinction is important, the two are historically very closely related.
Within our own country and around the world, groups of Islamic idealists are attempting to subvert our western values with the values of their Arabic home countries. From the UK to the Netherlands, in Germany, France and Australia, islamic fundamentalists of Arabic descent preach hatred and contempt for kaffirs, or non-believers. We cannot allow these groups a foothold here in our public education system. While some teachers may support the idea of ‘cultural relativism’, I don’t believe that the Arab culture is superior or even equal in any way, shape or form to our western Judeo-Christian culture and belief system.

This past February in Winnipeg's Louis Riel School Division, a dozen muslim immigrant families demanded changes to the curriculum to accommodate their fundamentalist view of Islam. The families don't want boys and girls in the same classes, such as physical education, and they don’t want any music taught to their muslim children, period.

Winnipeg School Superintendents says the families are "adamant' about this, despite both phys-ed and music being compulsory. How would Calgary teachers, who are already short staffed, handle any similar request for gender separation in gym? How long before islamic parents can "adamantly" demand no female teachers for their sons – or that headscarves for girls be required?

In the U.K. in 2007, some schools stopped teaching the Holocaust because it contradicted the anti-Semitic views held by "adamant" families there. The history of the Crusades was dropped too, because the "balanced" approach taken by schools contradicted what the local mosques were teaching. And in 2008, schools in Bristol yanked gay-friendly books out of libraries when Muslim parents complained.

I SUPPORT PUBLIC EDUCATION, and there are far too many legitimate concerns with our funding of inclusive education for all Calgary children to further divide this limited budget to include any instruction in Arabic culture. An April 19, 2011 CBE press release announced plans to cut 324 jobs this fall due to budget restraints, these cuts are on top of the 172 support position cuts announced in March.

Alberta Education has failed to deal with the group ‘Parents for Public Education’ - a group representing hundreds of parents who have reneged on their school fees for the past eight years, saying the up to $132-per-child charge is unlawful. Would the political will exist to deal with issues of inappropriate islamic teaching and curriculum if it were to become an issue?

Last month parents of public school students in Calgary learned that second language classes will no longer be mandatory in Grades 4 through 9, starting in the next school year. French and other languages will still be offered as an option in Grades 7 through 9, but schools with students in Grades 4 through 6 will decide whether to offer a second language, and which one to offer. Does it make any sense to stop teaching one of Canada’s two official languages, while at the same time offering classes in another unofficial one?

There is already the Edmonton Islamic School Society, operating as the Edmonton Islamic Academy, that last year received $3,473,000.00 from Alberta taxpayers (Canada Revenue Agency - Schedule 6: Detailed Financial Information). That’s 3 1/2 million dollars of my tax money to a school that has just recently been linked to the World Islamic Call Society based in London Ontario. That group had their charitable status revoked last week by the Canadian Government, because they’ve been caught transferring money here in Canada from Libyan Leader Moammar Gadhafi to the bank accounts of known islamic terrorists.

I don’t believe there is any single good reason to approve spending Calgary Public Tax Dollars on Arabic language and culture teaching. I believe I’ve outlined the risks clearly here. Unless all of you here petitioning for the effort can show me your fingers aren’t crossed, that you’re not practicing taqiyyah (ISLAMIC def: Concealing or disguising one's beliefs, convictions, ideas, feelings, opinions, and/or strategies) and say,
“We’re all modern Arabs here in Calgary, who don’t want sharia law, we know that Islam is a not a ‘religion of peace’, that the burqua is a symbol of opression, that gay men and women will be welcome in these arabic classes, that crucifixs’ can be worn, that the Holocaust really happened, that the Crusades were a defensive war against islamic invaders, and that Israel has every right to exist.”

Only then can we begin a discussion on the value to Canadians of an Arabic cultural education.
Posted by Don Sharpe at 12:11 PM