For those of you who see 'The Economist' as an in depth analysis of the world, look a little closer.  The May 7-13, 2011 issue (with Osama the dead terror-monkey on the cover) contains unsupported weak, leftist commentary in each of several successive articles. 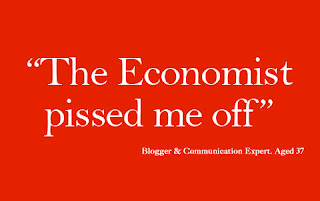 To wit:
1.  In 'Now, kill his dream' - Bin Laden is referred to as 'A man who warped a faith', suggesting that islam isn't warped at all, it's just a victim of barbaric maniacs.  Yeah, right.
2.  In 'Nudge it along' - The West and Israel, for their own good, should encourage Palestinians (hamas & fatah) to get together.  They spout hope that hamas will change their blood thirsty ways during the beauty of the 'arab spring', that we should 'give unity a chance' as rejuvenated Egyptians may 'tease (the process) along'.  Good grief, they make it sound like a high school dance.
3.  In 'Harper leads into new territory' - The liberals are identified as 'a consensual centerist party with a dash of Euro social democracy' and identifies Quebec voting enmasse for NDP candidates with no talent or expectation of ever governing as people who 'now want to play a more constructive role in federal politics'.  Ha! That one made me almost fall off my chair.
4.  In 'Harper's champagne moment' our new prime minister is identified as 'a stiff, cold figure', and Iggy (the loser) as 'a writer and academic'.  They state that Harper is 'unlikely to curb carbon emissions . . . from Alberta, with it's carbon-belching tar sands' - then they follow up with the usual fear-mongering about a 'secret agenda' that we only ever hear from the liberal far-left.  It struck me funny that Harper actually IS an Economist, and 'The Economist' finds it difficult to say anything good about him.
5.  In 'Toddle to the top' they wail that in the US 'state pre-school spending has decreased almost $700 per child' - from 2001 - down to what still amounts to over $4000.00 for each 3 - 4 year old enrolled in pre-school.  For someone like me, who never sent any of his kids to frikkin' pre-school, I'm wondering where my share of this tax funded largesse for little liberals went.

The not-so-subtle liberal undertone is there in almost every single article, it's enough to make you open a window and hurl the magazine as far as you can - in my case not far, as the only reason I bought it was for something to read on the plane from Toronto.  Still, the couple coming home from Jamaica in the seats in front of me no doubt believe I'm cursed with Tourette's from the muttered expletives I expelled until I put the damn rag down.  When I found this Jokes about Economists link, I felt better.
Posted by Don Sharpe at 11:35 PM