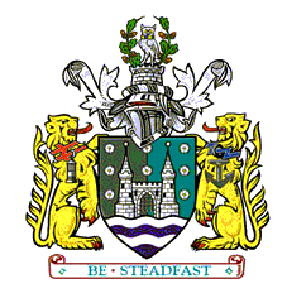 David Warren, writer and columnist for the Ottawa Citizen, and Peter Davies, the new Mayor of Doncaster, England. Similar outlooks, and hopefully a bell signalling a revolution in governance.

Governments should remain, ever the same; given that all free men and women are held to the same standard, without fear.

Not so difficult a motto to write, but a difficult creed to live up to in the politically correct age. As I read their manifestos, they stand for freedom and justice. As David says, "(both) freedom and justice must remain 'the same for everybody' and not preferentially applied, or 'graduated,' or otherwise gratuitously and minutely varied, in the manner of most of our government acts today."

Peter Davies is putting those words into action. Elected on June 5/09 as Mayor, Davies campaigned on a platform of:

-Eliminating all 'politically correct' jobs such as 'diversity officers'.
-Cutting his own salary from £73000 to £30000.
-Getting rid of the chauffeur and mayoral car.
-Reducing the number of town councillors from 63 to 21.
-Cut twin town ties with 5 of the nine towns involved.
-Eliminate funding for the annual gay pride parade.

Some of these commitments Mayor Davies has had trouble keeping, just from a legal standpoint, and as a novice in the political arena (he never did serve as a town councillor) his first interview with the BBC was pretty rocky. Transcripted: (here)

It's enough for me that Mayor Davies' heart is in the right place, and I believe that although unskilled, his honesty and righteous confidence will see him through.

I applaud a brave man who decides to stand up for, as David Warren does, an 'Elizabethan style' fiscal policy (avoid debt whenever possible; keep taxes down) and rejects the 'moral relativism' that our current governments and so-called 'human rights commissions' routinely lower themselves to.

"The state must therefore be minimal, too: its functionaries stripped whenever possible of their audacious hopes, and ability to change things. For the state should be the means of last resort and not, as it has become, a voracious beast, with an ever-increasing appetite to control the souls of men, by appropriating their possessions."

Peter Davies, Mayor of Doncaster, England, is a hero. We need more of them.
Posted by Don Sharpe at 1:01 PM