I'm not a muslim, I just play one on TV. 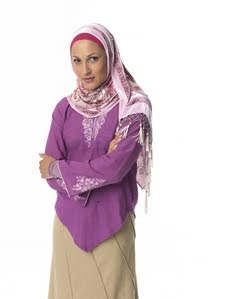 Most theatre goers love a good tragic comedy, and this show just might become one.

It's only going to take one radical islamist to get huffy when he realizes that the 'sassy and classy' Sitara Hewitt from 'You Bet Your Ass' is also the same uppity gal the CBC bills as the 'smart, outspoken & devout' Rayyan who always wears her hijab in public. 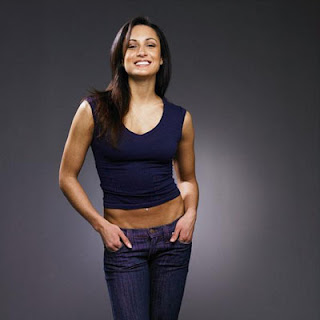 A few rounds of "Allahu Ackbar!" and the CBC would have a sticky problem in their weekly programming meeting. "Do we cancel? Do we appease?" I wonder how long they'd last in the face of a Human Rights Commission complaint from an angry imam? Could they hold out for 900 days like Ezra Levant did, or would they fold and fade away in less time than it takes to soft boil an egg?

Sitara has proven many times over her on-screen prowess. Confident and well spoken, you can find a collection of clips featuring 'Tara' on one of her Youtube fan sites. Model turned Actor Sitara is of Pakistani and Welsh descent, and frequently includes in any biography her time spend in the mountains of Pakistan with her mother, who was studying for a PhD.

Sitara in fact reminds me of my own two daughters, both of whom are intelligent, compassionate and independent, and that is high praise indeed. More disturbing though, is the flippant attitude Sitara carries on in an August 2007 clip from an interview with George Stroumboulopoulos. I would hope that I never see my girls treat the oppression and subjugation of women as something to be 'respected', just because they live in another country.

George is an amazing interviewer, honest and seemingly straightforward, he often convinces his guests to reveal more than they may have intended to. Sitara deflects quickly, but reveals that she 'would never walk around with her head uncovered in an islamic country", and describes herself as 'very comfortable' wearing a hijab. When George (so casually seeming, I love this guy's style) mentions that perhaps that's because she has the choice, Sitara compares not wearing a headscarf in Pakistan with walking around topless in Canada. Hardly the point, but George leaves it there, letting the viewer attempt to digest the rationalization.

Perhaps a quick review of the liveleak video posted today at Holger Awakens, 'Yemeni girls being married off at 10 years old' might give her pause for thought.

Little Mosque on the Prairie (L-MOP) is a direct rip-off from many successful sit-coms, and many of the comments over the past two years are similar to ones found on thepaul's blog in March 2007, "I encourage you to watch and learn to enjoy this interesting little show."

I'm waiting for the premiere of 'Little Church in the Sand', filmed in Saudi Arabia, where L-MOP is apparently big. The comic stylings of the 'angry youths' storming and burning the place to the ground will be a gut-buster for sure.

Currently on CBC, L-MOP reminds me of the 'Beverly Hillbillies', with the same dark characters and loveable losers. (Jethro = Baber / Rayyan - Ellie Mae) Only problem with this analogy, no 'hillbillies' ever flew a plane into a building full of people.
Posted by Don Sharpe at 11:17 AM