Tarek Fatah - the only muslim spokesman who makes any sense 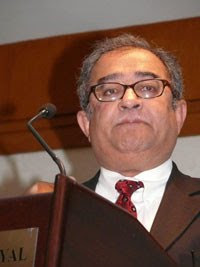 I went to see Mr Fatah speak at the U of C last night, sponsored by the Center for Inquiry. Mr Fatah is an knowledgeable and entertaining speaker, engaging the crowd with comments like; "Ask me anything, don't be afraid of offending me, I'm sick of political correctness!"
Mr Fatah identifies himself as a practicing muslim, and described his time at mosque on Friday's as 'frequently something you'd see on Saturday Night Live'.
"There's alway some fat guy saying 'Straighten the prayer line!' and whenever you stand up, 'Move forward please, shoulders touching!', or 'No clapping, brother. You invite Satan in when you clap!'" There were times last time when the crowd was literally roaring with laughter. None laughed harder than the 3 hijab wearing muslim girls sitting two rows behind me.

Tarak Fatah says what's missing from the muslim culture is a sense of humor. Speaking of Mollie Norris, who started the whole 'draw mohammed day controversy, he said, "I was facebook friends with Ms Norris, it is very sad what happened to her." Adding this to what I knew of Mr Fatah from his books, blog and CTV interviews with a CAIR representative, I can say that I found him quite likeable.
I also wonder why he's:
A. Still alive.
B. Still a muslim.
He read out loud his latest email death threat last night, from 'e-mat', and even asked the crowd 'If Mr. e-mat is in the room, could he please indicate himself'. Tarek scoffed at 'e-mat's handle', saying it was probably a westernized version of his arabic name, invented so he could 'look cool and get chicks'.
Mr Fatah attempted to convince the crowd that there were two groups of people, practically unrelated to each other. He described one group as muslims, and the other as islamists, who are really 'islamic-facists'. He stated that imam's across Canada started every Friday prayer off with the phrase, 'Allah grant us victory over the kuffar', saying the quote is always read in arabic, so most of the congregation don't even know what's being said. According to him, most muslims haven't read the Koran, and are just like many westerner's in Christian churches, they can't wait for the service to end so they can get out of there and back to their lives.
Tarak Fatah spoke to the athiest's in the crowd, saying "I don't know how you do it, I've tried, and after a day or so I have to pray or I start to shake!" Mr. Fatah is a learned scholar regarding the koran and the history of mohammed, and skillfully answered detailed questions from members of the audience regarding those topics, none of which interested me.
The most memorable statement from last night was,"muslims are stuck in the 13th or 14th century, and are still waiting for their Martin Luthur King." He says that "most muslims are held hostage by their mullah's participation in the 3 most important passages in their lives; the birth of their children, the marriage of their children, and the death of their mothers."
Muslims would be "better served weeding out the islamist leaders in their midst", according to Mr Fatah, "rather than trying to convince non-muslims that collectively they mean us no harm". Mr Fatah has no time for the liberal handwringers and multiculturalists, who he says 'buy in' to all of the excuses and grievances these islamic-facists bring to every argument about Islam.
Tarek spoke with great sadness and compassion about Aqsa Parvez, honor killings, and the poor woman from Indonesia who was caned last week for selling vegetables 1 hour before the official end of ramadan. He spoke of his defence of Maclean's Magazine from the so-called human rights commission, and the importance of a secular democracy. "Every time Islam becomes political, people die". He spoke of his distaste of sharia law, stating "nobody wants it, not even in islamic countries, (unless they're the ones in power)."
Tarek confirmed my feelings last night that western civilization is in steep decline, and that muslim leaders are a bunch of violent retards. "You live here in the west in a mansion your parents gave you, and you're renting out rooms for a $1,000 dollars a night to people who only want to destroy you. You get more worked up over a bunch of gladiators on ice skates fighting with sticks than you do about your democracy."
This morning as I write, the CTV news top 4 stories are:
-Muslim leader of the Toronto 18 is going to have his bail revoked,
-Muslim bomber will be sentenced for trying to blow up Times Square,
-Muslims bomb Nato trucks for the 4th time in Islamabad, and
-Muslims kill 3 NATO soldiers in Afghanistan.
Hopefully we can all get our collective western heads out of the 1st world feeding trough long enough to look around and see how dangerous our world is becoming. There are some bad, bad people out there who literally want to kill us all, Tarek Fatah remains the only reasonable muslim spokesperson I've ever heard of. Why he is still a muslim remains a mystery to me. Why he's hasn't been murdered by the humorless islamic-facists he so clearly points out is a miracle.
Posted by Don Sharpe at 5:33 AM