You'd have to be crazy to go to this rally.

** Update ** Poll at Jon Stewart's 'bipartisan' rally showed 86% of attendees planned to vote democrat . . .... 1% planned to vote republican.
Jon's 'rally to restore sanity' yesterday featured one of the crazies muslims on earth. Cat 'Yusef Islam' Stevens wins my 'medal for rediculous-ness', making millions as a hippie peacenik who then became a thug in the islamic shakedown game.
Here's bitch-kitty Stevens calling for the death of Salman Rushdie in 1979, just in case anyone forgot which team this moron plays for. 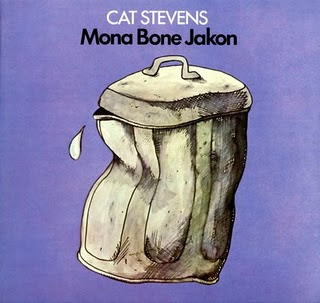 I like to remember Stevens by this album cover, from 1970. The garbage can is a foreshadow of where the 'moonshadow man' was going to end up.
The title of the album? Yusef said then that, "Mona Bone Jakon is another name for my "penis." Now it's 2010, and it's a damn sad day when a hippie looks back on his lost sense of humor.
In the Islamic Republic of Iran, music is haram (forbidden) and he'd at the very least be jailed for performing 'Peace Train' with an infidel like Ozzy Osbourne singing 'Crazy Train'.
Is the irony completely lost on these idiots?
Posted by Don Sharpe at 5:18 AM