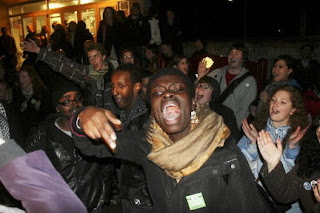 "Ann Go Home!"
"Ann contributes nothing to anything!"

Then there's Ann's own personal favorite:

"Whereas Ann Coulter is a hateful woman;
"Whereas she has made hateful comments against GLBTQ, Muslims, Jews and women;
"Whereas she violates an unwritten code of 'positive-space'

Unwritten code of positive space? Is this a joke?
These idiot children spend how many hours on this instead of studying?

Ann Coulter's value to Free Speech and Democracy was evident last night, if you consider nothing else then the fact that she exposed how stupid the average leftist university student is.

Kids came up to the mike during the Q&A one after another, reading carefully crafted paragraphs that prompted Ann to insist, "Do you even have a question? Because if you don't, then rent a room and make your speech there!"

Quoting what Ann calls her 'Top Ten Hits' of out-of-context quotes from OVER A DECADE AGO, these budding intellectuals had the pre-eminent right wing harpy in their sights, and the best they could come up with was quotes first made when they were in elementary school? What a waste of study hall time!

Thanks Ann, for exposing the raw mental horsepower of the typical liberal studies major. My god, the future looks dark indeed.
Posted by Don Sharpe at 11:43 PM