*Update* Feb 12 - Opening Ceremonies
Her somber expression, dressed in a black burka walking into BC place, turned the athlete's entrance into a 'walk of shame'. The cameras stayed on her for such a short time, it was certainly uncomfortable for anyone to watch. What a contrast between her and the smiling, happy Israeli athletes who followed (alphabetically) right behind them! Go Canada!! Go Israel! Go HOME Iran!

The 2010 Olympic misfit.
"I'm so proud to be a muslim iranian olympian." 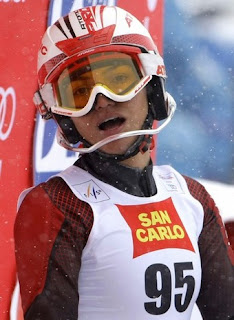 Yup, I'll bet that's just what the mullahs will say when she gets home.
CNN story: First Iranian woman in Winter Olympics history.

Off the slopes, she is expected to observe the Islamic dress code, or hijab, but on the slopes, she will compete in the (way too damn sexy) aerodynamic ski suit and helmet worn by her Western rivals.

When she gets home, she'll no doubt be welcomed as a hero by the same mullah morons who reportedly last year said that women should not ski because the movement of their knees looked "more like dancing than sport."

The whole thing would be every bit as entertaining and endearing as the Jamaica Bobsled team was, except the Jamaica snow-sliders didn't have to worry about possibly being executed when they returned home.

Maybe, when you see her ski, you'll remember the '10 women of Shiraz' 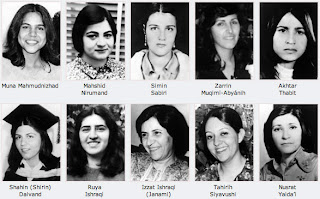 June 18th will mark the anniversary of the hanging of these 10 Bahai women in Shiraz (June 18, 1983), one of whom, Mona Mahmudinizhad, was only 17 years old.